The importance of playing with small dogs and large dogs alike is crucial, especially in the early developmental years. Like chew toys for their teeth and food and chewing treats for their physical health, challenges and games are also important as they not only physically challenge and develop your pup but also mentally develop them.

It is important for dogs because it helps keep them calm and behaved in the home.A lack of exercise is both bad for their physical health but also can lead to behavioral issues in the long-term. A lack of play in the home has also proven to cause anxiety and aggression issues, especially in puppies.

In addition to the stress of the animal itself, it also affects the human by causing whining, jumping up and not listening when called. Both humans and dogs are species that continue to play well into their adulthood.This is why it is important to create an environment where play is encouraged, for both our mental health and theirs.

So, how do we do this? Well, the first time is crucial. If the pet owner does not have the time for regular play and walking it could really hurt the dogs and puppies development. It is important to either free up time or find someone who can do this for the owner (there are many services available online that offer regular walking services for your pet).

Another means of encouraging and facilitating play is through animal toys. Animal toys can be found in almost any store including your local grocery store. This article was written for the animal lover and dog owners who are interested in creating more of a dynamic toy box for their animals in order to optimize their mental and physical growth. Here are the 5 good ideas for young dogs and older dogs alike that should be included in your dog’s toy box: 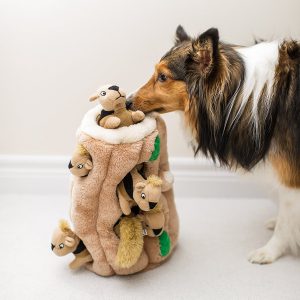 The natural instinct in puppies and dogs are to hunt. Squeaky toys imitate the feeling of the hunt for pups. They mimic the sounds of their prey and this is one of the reasons dogs like squeaky toys.If you can’t stand the sound of the squeaking or if living in a smaller space, there are alternatives available.

There is a brand of toys from Australia that use ultrasonic technology with squeakers that only dogs can hear. These toys give pets the same sensation and enjoyment of traditional squeaky toys but without irritating their owner. 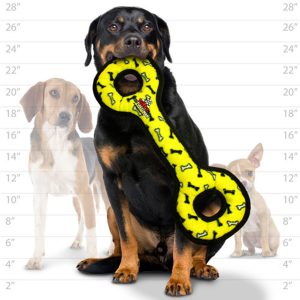 Tug toys help strengthen teeth if used correctly which is great for their dental health as well.There are also alternative solutions for tug toys (especially for stronger dogs that may pull or shake too aggressively for their owners) that attach to trees or come with lines to run along the yard.

These toys usually use bungee cords to create a force for the pup to tug against and because it hangs in one place dogs will remember where it is. Additionally, because it hangs, it won’t get dirty from it rolling around on the ground. 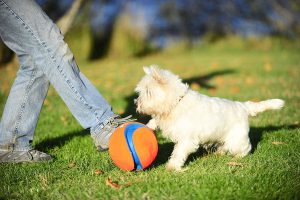 Fetch toys (mostly in ball or Frisbee form) are loved by pups. The act of running and fetching is great exercise for dogs. It is also great for teaching them obedience. Working dogs were selected based on their obedience when being utilized for herding sheep.

Feeling that sense of control not only creates better obedience in dogs but it also improves the dogs’ confidence. The feeling of the chaise and the reward after creates better-behaved dogs as well as helps build a better relationship between the dogs and their owner. 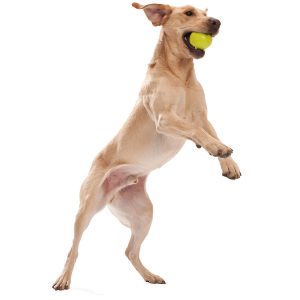 Similar to fetch toys, these toys encourage the dog to chase it. This can be in the form of a ball that is thrown or shot with a sling but this can also be electronic toys that run on their own. Dogs love to chase things (try running away from a dog and see what happens).

The chase for dogs as listed in the Fetch section of this article is because of the hunter and prey instinct in dogs. Rather than putting them in an actual chase situation (like with other animals like cats and rabbits) allowing them to exert that energy with a non-living object creates a safer environment for the dog and a less stressful situation for both the prey and the dog owner. 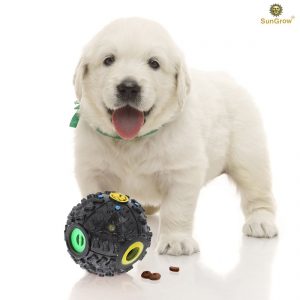 Not always the most popular toy chosen but puzzle toys are great for dogs and their mental development. Puzzle toys help dogs use their brain to solve problems. They range from pretty simple to difficult depending on the intelligence and breed of the dog.

One common puzzle toy is a Kong which is a ball with a hollow center that is meant for the human to put a treat into. The dog smells and/or sees the treat and works to get the treat out of the center. It is tricky and takes some time hence why this is also a good toy for puppy and dog parents that work during the day, leaving the dog alone.

The dog becomes distracted with their toy and this occupies them in time they would typically suffer from separation anxiety. So, for obvious reasons, this is also great for a dog with bad separation anxiety.In conclusion, putting some thought and variety in the dog’s toy box is important.

Simply buying a plush toy and letting the dog go at it isn’t sufficient for the dogs overall development. It’s important to entertain, exercise, and challenge dogs in order to maximize their development. We hope this article was informative for you and helped spur some ideas for your puppies or dog’s toy box. Happy play!

If you are looking for more toy ideas for your dog there are many different kinds to choose from. Don’t be overwhelmed! Some dog toys have proven to be very popular for good reasons. Some toys rise to the top as far as popularity because of dogs attachment to these toys. Find out more about other dog toy ideas in this post “5 Hottest Dog Toys“. Don’t let your dog get bored!