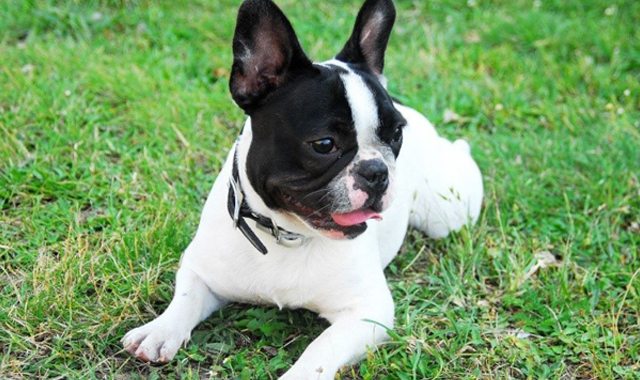 The Frenchton is a fairly new, cuddly designer breed that’s growing in popularity in the United States. This adorable breed is a perfect mix of the French Bulldog and the Boston Terrier. Frenchtons are great family pets. They can live a long life if kept healthy and their small size makes them easy to care for.

This adorable breed is a perfect mix of the French Bulldog at 75% and the Boston Terrier at 25%. These dogs can also have a 50/50 mix. Frenchtons were bread originally to get rid of some of the genetic and health issues of the 2 parent breeds such as skeletal disorders, acne, and the under-bite in bulldogs. Some of the issues with Boston Terriers can include Brachycephalic Syndrome and a few others.

Frenchtons are part of the brachycephalic breed which have a physical characteristic of a short head and snout. This feature also can contribute to it’s respiratory issues if yours has them.

What’s the Difference Between a French Bulldog and a Frenchton?

French Bulldogs are a recognized breed from the England. These dogs were a mix between mini bulldogs, Pugs, and Terriers to get a smaller healthier dog. They are hard to tall apart from a Frenchton but are typically stockier. They are also prone more to the respiratory issues that came from the bulldog breed.

Is the Frenchton A Recognized Breed?

This breed isn’t recognized by the American Kennel Club and won’t be until they have been bred for many generations with stability, as they’re still considered a rare breed. They are recognized by the Designer Dogs Kennel Club, the Dog Registry of America, the Designer Breed Registry, the American Canine Hybrid Club, and the International Designer Canine Registry. They also go by several names besides the Frenchton, which include the Frenchbo, Frenchies, the Faux French Bulldog, and the Boston Frenchie.

To better understand this mixed breed, a history lesson on the French Bulldog and Boston Terrier, including health problems that persist in these breeds, is in order. Then, we can discuss grooming, training, and temperament. 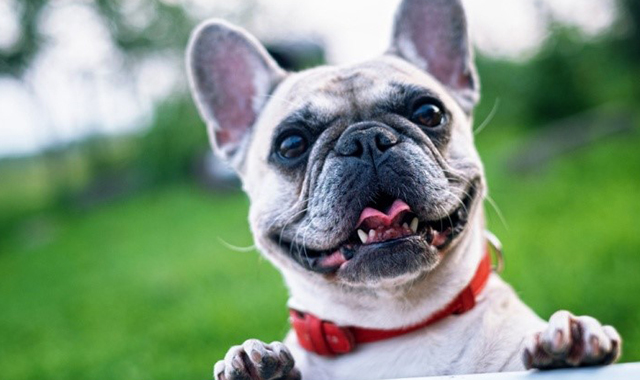 The French Bulldog is a descendant of the dogs of an old Greek tribe that was bred into the Mastiff and then eventually bred into a Bullenbeisser. Bullenbeissers were originally bred for bull baiting. Bull baiting was a horrendous blood sport in which bulls and dogs were thrown together in order to fight for English entertainment. Thankfully, England outlawed this act in 1835.

How Bulldogs Migrated Across the World 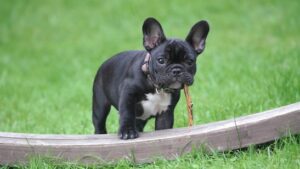 They continued to breed these dogs for companionship and to create a smaller dog they started breeding Bullenbeissers with Pugs and various terriers. Immigrants from England moved to France and brought along these small bulldogs. They became a cherished pet in homes across France and eventually were introduced into the United States.

They are very loving dogs and wonderful with children. The females can be extremely protective of children in the home. They rarely bark, which is always a plus for any dog owner. This breed is known to have severe separation anxiety so they can’t be left alone for very long. They become destructive because of their anxiety and will chew up furniture and urinate in the home.

You don’t want to over-exercise this breed, a short daily walk suits them just fine. 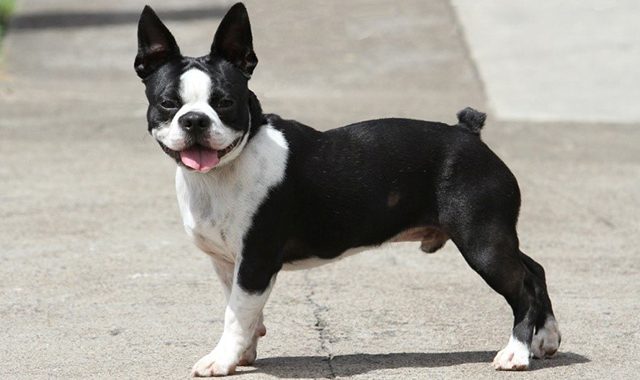 As the name suggests, the Boston Terrier originates from Boston, Massachusetts and they’re also fondly known as “The American Gentlemen.” Robert C. Hooper, from Boston, purchased a mixed dog from a bulldog breed and terrier breed. He bred this dog with a French Bulldog to create the Boston Terrier. They were a hit in Boston and were the first non-sporting dog that was bred in the United States. They were accepted by the American Kennel Club in 1893 as a companion breed. 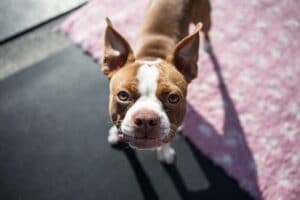 This breed is very friendly, eager to please, and highly intelligent. Despite their stubborn quality, they’re also easy to train and love children to their core. They can be a bit barky, but if you start training early this is easy to correct. They are mostly gentle dogs, though the males can be a bit aggressive at first if they feel their territory is being threatened by another male dog. After being socialized enough, this aggression is almost non-existent. They can also become a bit protective of their owners but not overly so to be worried.

Much like the French Bulldog, the Boston Terrier can’t tolerate too much heat or cold because of their short muzzles. They have a sensitive digestive system, eye issues, and are prone to snoring and reverse sneezes. They tend to live 11–13 years of age.

Features of the Frenchton

Puppy litters are usually 5–10 pups and no Frenchton litter is alike. The most common coloring of Frenchton pups is cream, golden, black, black and white, and the rare brindle. 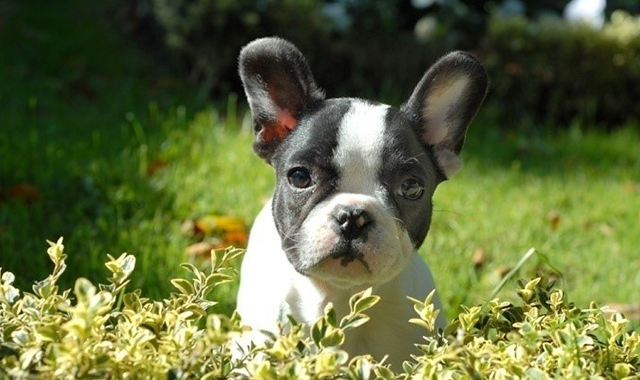 Because of the French Bulldogs features, they are prone to breathing problems, back problems, eye problems, and dislocating kneecaps. They are also unable to regulate their internal temperatures making them susceptible to heatstroke. Despite these issues, they can live up to 12–14 years on average.

Here are some of the Frenchton’s notable health problems:

Because Frenchtons have the characteristics of the French Bulldogs nose and nasal passages they have been known to snore. They are banned from traveling as cargo on most airlines. Does it get any cuter?

Dry eye, corneal ulcers, and cherry eye are some of the eye issues Frenchtons can inherit from their French Bulldog ancestors but it can be rare.

Frenchtons have been know to have allergies. You can have your dog tested at the vet for many different pathogens. Frenchton’s can be allergic to chicken. There are many limited ingredient dogs foods to choose from to isolate your dogs specific allergy.

Choosing a good breeder can make the difference in health. Make sure to ask your breeder about these health issues when choosing a dog.

As long as you feed your dog with high quality dog food, keep them updated with vaccinations and make sure they get plenty of exercise there is no reason why you should expect anything but a happy long life.

Frenchtons are very lovable pups. They can have crazy energy but also adore a good cuddle. Frenchtons are great with children, though all dogs should be slowly socialized before introducing them to too many humans. They are great as watchdogs with very low aggressive tendencies. As their tolerance for children, they get along wonderfully with other pets. Most training is easy, though they can be a bit stubborn in their own rights. 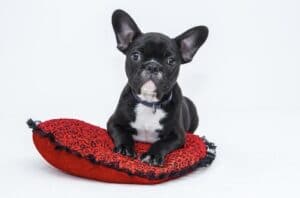 These dogs are very low maintenance in the care area, though they do need quite a bit of human interaction.

Grooming is especially easy. They rarely shed and thanks to such a short coat of hair, a few brushes a week is adequate. Bathing should be limited to when they’re overly dirty and stinky, as over-washing these guys can irritate their sensitive skin.

Mostly inside dogs, the Frenchtons are also very inquisitive and social. They will enjoy walks as long as it’s not too hot or cold. Take Frenchtons on daily walks to keep them healthy. Make sure to keep them on a leash as they will want to socialize with other dogs and humans. They also do well in dog parks. Of course what dog does not want to be social? Dogs are pack animals after all.

Despite their breeding, they have trouble regulating their internal temperature. This is in part due to their short hair which does not provide as much insulation. Their respiratory issues also contibute because this is how a dog regulates it’s temperature.

Is the Frenchton Right for You?

This fantastic new breed is making splashes for a reason. If you are on the lookout for the perfect family dog and see Frenchton puppies for sale through recognized Frenchton breeders, you should snap one up today. Besides they’re lovable qualities and great companionship, Frenchtons are very lively and great playmates for children. As all dog owners know, we never truly own a dog. They are our family, they are our children. Frenchtons are great for any family environment and the breed is going to continue to blossom. Before we know it, these pups will be accepted and loved by all dog enthusiasts and will surely become one of the most popular dog breeds out there.