While they were originally bred to hunt boar, birds, and small game in Japan, the role of the Shiba Inu has changed. People sometimes mistakenly call this a Shemu Emu Dog. Modern Shiba Inus are used as companion dogs, primarily in their native country and in the United States. But what makes this breed a good companion and how do you know if it’s the right breed for you? 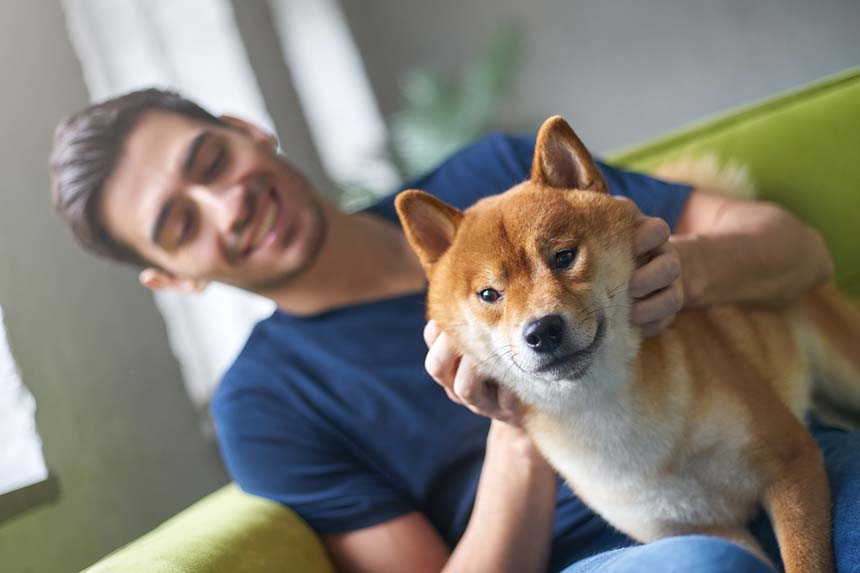 There’s a lot about Shiba Inus to love! Keep reading to find out if the breed is a good match for you and your family.

Believe it or not, ancient ancestors of the Shiba Inus were thought to have accompanied the earliest settlers to Japan as early as 7000 BC. Archeological discoveries indicate that some of the earliest settlers, the Jomonjin, lived with dogs that were the same size as a Shiba Inu. Later, in the third century BC, other groups of immigrants brought their dogs to Japan. They started breeding with the Shiba’s ancestors and produced the 6 distinct dog breeds that developed from native Japanese dogs. All of these breeds share similar traits because they all have a common ancestor that passed along the point, erect ears and curly tails. The Shiba is the smallest of them.

World War II nearly extinguished the breed either during the bombing or in the immediate post-war years. In an attempt to save them, a breeding program was begun that bred the 3 different types of the Shibas—the Mino, the Sanin, and the Shinshu—with each one named for the region it originated. By this time, the Shinshu was more abundant than the other 2 types which had practically become extinct. The problem was so widespread that they had to find Shiba Inus from remote rural areas to breed because there just weren’t very many left.

Shiba Inus were saved through these efforts, though it did create some unforeseen variations in bone structure. Soon after the post-WWII efforts, Shibas grew in popularity and even made their way out of Japan for the first time. The first Shiba Inu puppy was brought to the United States by an American service family in 1954. The breed grew in popularity. In 1979, the first litter was born in the US and in 1993 the breed was officially recognized by the American Kennel Club.

Shiba Inus are small- to medium-sized dogs. They’re muscular, compact, and well proportioned. On average, Shiba’s are a little over a foot high at the shoulder and weigh approximately 20 pounds. Of course, this varies between male and female Shibas and it’s always possible to have one that does not meet the breed standard by being either too small or too large. As we say in their history, the Shibas are the smallest of the 6 different dog breed that originated in Japan. They have an impressive lifespan and can live up to 16 years.

Shiba Inus look like a mix between a fox and a fluffy stuffed animal. In short, they’re adorable. They have a round face and squat, pointy ears, and squinty eyes that make it look like they’re always smiling.

There are 5 different kinds of coats that a Shiba Inu can have:

Shiba Inus are solid, muscular dogs that are fast and nimble. Don’t let a Shiba Inu off the leash when you’re outside. Remember, they were originally bred to be hunters and he will take off at the first sight of a squirrel or other animal—or just because he wants to.

The Japanese describe Shiba Inus with 3 words: “Kan-i” which means they brave and bold but also can maintain composure and demonstrate mental strength; “Ryosei” which is good-natured and gentle; and “soboku,” which means artlessness with a refined, open spirit. Some Shiba Inu owners love this combination. Love it or hate it, it’s important to understand it before you make the decision to being a Shiba Inu into your home.

Shibas are bold, stubborn, and intelligent. They are keenly aware of what is going on around them and pay close attention despite being fiercely independent. Shibas are smart enough to understand what you want them to do—they just don’t do it unless they want to. As you might imagine, the combination of all of these traits can make them a little difficult to train. The one exception to this is housetraining. Shibas are typically a very clean breed and won’t want to go to the bathroom near the places where they sleep and eat.

The best way to have success when training a Shiba Inu is to begin when the dog is really young. Early training and socialization with other dogs to learn how to interact are essential.  If you’re having trouble with training, don’t worry! It’s common, especially with a smart, stubborn breed like this one. Look for a trainer that has experience with Shibas if you’re not sure where to go next.

Despite these training difficulties, Shiba Inus make great family dogs if socialized within the family at a young age. They are fiercely loyal and protective and make excellent guard dogs.

Caring for a Shiba Inu

This breed needs a lot of exercise—at least one good workout a day. Take him for a long walk, let him run around a fenced-in yard, or play fetch. He needs to run and stretch to stay in shape. They may be a small breed, but they need a lot of space.

They also hate being on a leash, which is unfortunate because they really need to be on a leash! Even though they will protest, remember that it’s for their safety. You have to keep them restrained when they’re not in an enclosed area for their safety and the safety of other people and animals in the area.

As for feeding, Shiba Inus require two high-quality meals a day. How much he needs will depend on their specific size and activity level but you should give him ½ to 1 ½ cups total every day, not at each meal.

Grooming can be a little hairy. Shiba Inus have a thick double coat. The outer layer is stiff and straight while the inner one is soft and thick. They shed throughout the year. Twice a year, though, the shedding amps up and it pretty much gets everywhere.

Coat colors vary slightly from orange-red with cream on the stomach to black tipped hair on a red background called sesame. You might also find white marking on the tips of the ears or tail. Brush your Shiba Inu a few times a week to stay on top of shedding, especially during one of the peak shedding periods.

Check your dog’s ears weekly, too, by getting an ear cleanser and using a moist cotton ball to wipe the outer ear.

Shiba Inus are solid, sturdy, healthy dogs. They love to exercise and are generally agile and resilient. That said, because of their history and the limited bloodline to repopulate the breed after WWII, there are some genetic defects that can affect the breed.

There are two ways to go about bringing home a Shiba Inu. The first is to buy one from a reputable breeder. There are Shiba-friendly organizations like the National Shiba Club of America that have a lot of information about how to choose a breeder and even provide you with a list of reputable ones in your area.

Take your time when choosing a breeder. Visit several and go with the one who makes you feel the most comfortable. Ultimately, trust is the most important thing. You need to believe everything the breeder has told you about the puppy and you need to work with someone who is willing to be there for you after the sale. Visit the litter to see how the puppies are growing. The breeder should want to get to know you, too, since you’ll be taking one of puppies home.

There are also opportunities to get adult dogs from breeders. Often, these dogs are either dogs they were hoping to show who didn’t meet the breed standard or adults who are now too old to breed. Either way, older dogs like this make great family pets. Visiting them to see their temperament will tell you a lot because who they are is who they are. Adult dogs aren’t unpredictable like puppies and will adjust well to a new family.

Getting a Sheltered Shiba Inu

Because Shiba Inus are becoming more popular and because they can be stubborn and difficult to train, a lot are ending up in shelters and other rescue facilities. There are a few ways you can tell if the shelter you’re working with is reputable:

It’s important to get your Shiba Inu from a reputable source, whether it’s a breeder or a shelter. Avoid pet stores at all costs. Puppies sold in pet stores are bred purely for profit. There’s no guarantee that you’ll get accurate information about your puppy or his lineage. Plus, it is unlikely that people who are selling these dogs for profit prioritize the dog’s welfare.

Shiba Inus are a great breed but because of their stubborn personalities and the possible training difficulties that come with it, Shibas are not recommended for first-time dog owners. They can be a little hard to train and someone with no experience owning a dog might have some trouble keeping them motivated and getting them to do the work.

If you’re moving forward and adopting a Shiba, great! Don’t be scared off. They’re not easy, but they come along with a lot of loyalty and love. Shiba puppies should be socialized with adults, children, and other pets as soon as possible. Crate training is essential because they’re so curious and they’re bound to get into all kinds of trouble if left alone to wander around the house. Puppies also have a tendency to snap and nip at things. It’s important to redirect the behavior so they figure out that it’s not acceptable.

They grow up into the next stage at around 6 months. This is when you should get them spayed and neutered, not only to prevent unwanted breeding but also to control aggression in males and protect them from some possible health problems. It’s around this time that they also start to head into the puppy version of the “terrible 2s,” challenging rules and pushing boundaries. They also go through a teenager phase between 2 and 3 years where they continue to challenge rules and exert their independence. These phases require consistent correction and redirection. Then at around 3 years old, things calm down. With the right owner and direction, your Shiba will begin to enjoy life.

Shibas are amazing dogs but it’s important to realize that they aren’t a good match for everyone. These are stubborn, intelligent, fun-loving dogs who aren’t really concerned with whether or not they’re making their owner happy or not. Shiba owners must be prepared to work hard and put the time in to make sure their pets are properly trained, especially when they’re puppies. Through a lot of time and effort, you’ll form a bond with your Shiba that will last a long time. If it’s a good match, you’ll have made yourself a furry friend for life.

Are you looking for your next dog? Do you have children are are looking for a dog that’s great around kids? Try reading our article  “Child Friendly Dog Breeds”. This article has some ideas on some of the best dog breeds for children.

About the Author: Eira

Check is out on Social Media!