The Bazook-9 tennis ball launcher is a gun-shaped plastic bazooka that fires off tennis balls for your pet to fetch. It’s a fairly new product, having come on the market in October 2015, but it already has loads of positive reviews from dog owners who are pleased with the machine’s lightweight design and hands-free pickup feature. Is the Bazook-9 a worthwhile product for an energetic dog who loves to chase down tennis balls? Read on for our assessment.

Review of the Bazook-9’s Unique Pickup and Storage Features 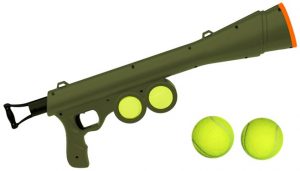 What separates the Bazook-9 from other tennis ball guns on the market? Well, it has a handful of interesting features. First, the balls can be stored right on the machine itself. As you’ll see in the photos, there are two ball slots just beneath the barrel of the gun where you can store extra balls.

This is a terrific idea, as it keeps users from having to stuff extra balls in their pockets or carry them around. This little storage compartment also keeps the balls from getting lost. No need to worry about the balls rolling away when you put the machine down, since they are attached to the device.

The other cool thing about this launcher is that its large opening can be used to pick up the balls. Instead of manually shoving the tennis balls inside the gun, you can simply press the barrel opening over top the ball and press down, securely locking it in place. This way, you never have to touch balls that are dirty or slobbery.

Check out the amateur video below which demonstrates how the Bazook-9 can be used at home and how its hands-free pickup enables the owner to grab the balls without having to expend much effort.

What Kind of Tennis Balls Does the Bazook-9 Use?

One of the main questions with any dog ball launcher is whether it uses standard-sized tennis balls like the GoDogGo, or whether it requires a different-sized ball, like the iFetch. The Bazook-9 does indeed fit regular tennis balls, so any balls you already have lying around at home will work just fine. Woohoo!

That said, Bazook-9 went above and beyond, because the balls they provide with the machine are not plain old tennis balls. Instead, they are soft and squeaky balls, which adds a nice audio element to the fetch process for any pups who like hearing squeaky sounds when they squeeze their fetch toys.

How Far Does the Bazook-9 Shoot its Balls?

Some users say they can throw the balls as far as the machine shoots them, but of course the purpose of the machine is to be able to simply squeeze a trigger rather than having to do all the manual labor of heaving them across the park yourself.

Considering all the cool features this tennis ball launcher gun has, and its relatively low price tag compared to other launchers (see its current cost on Amazon), the Bazook-9 is a solid budget tennis ball gun purchase. It may not consistently shoot balls 50 feet or more, but as a smaller-scale gun, this product is worth the value and will provide plenty of fun with your doggie.