When it comes to hand-sized dog ball launchers, ChuckIt! is perhaps the most prominent brand name in the “fetch games” niche. With the ChuckIt dog ball launcher dog owners can fling tennis balls and smaller, simpler indoor items like tumbler toys up to 140 feet!

ChuckIt has been making dog toys since 1998 and has built up a trusted reputation. Read on to discover some of our favorite ChuckIt products.

The Classic Chuckit Ball Launcher is a simple device that allows you to fling balls for your pet to chase. The launcher comes in several different sizes, from 2-inch balls to the large Sport 26L designs toss large balls farther.

The cool thing about the Classic Launcher is its claw-style grip, which means that you won’t have to touch the balls yourself. The hands-free design means you won’t be getting doggie slobber all over yourself while you play! 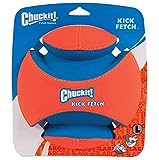 What if tennis balls just aren’t big enough for your pooch? If you need something much bigger – the size of a soccer ball – then look at the Kick Fetch. Constructed from high-bounce rubber with a puncture-resistant foam core, the Kick Fetch is like a soccer ball, but it has grooves in it (“inverted variable welts”) to allow dogs to grab it with their teeth.

This ball is large enough that you’ll want to kick it rather than throw it. The Kick Fetch is one of ChuckIt’s most popular and highest-reviewed products, so don’t hesitate to purchase this one if it sounds like something your best animal friend would enjoy.

And guess what? They even make a ChuckIt! Kick Fetch Dog Toy Ball, Glow In The Dark, Large  for busy pet owners who aren’t able to play until after dark!

Dogs always love to chase Frisbees, and this product is one of several Frisbee-style items the company offers. The flying ring is not made from hard plastic like many of ChuckIt’s products, but instead from a soft but durable material similar to nylon. It’s good for big dogs who tend to chew up other discs.

The flying ring is 9 inches in diameter and can be used in the backyard or in water, hence its “amphibious” descriptor.

Here’s a cool toy for dogs with a natural hunting instinct. The duck diver is a floating toy that looks like the backside of a duck sticking up out of the water. Toss it in the water at the dog beach and let your pup chase down the wannabe duck. It’s made from a rugged material designed to withstand a lot of wear and tear. 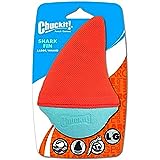 It’s shaped like a shark fin sticking out above the water line. 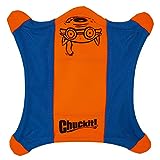 This product is so weird and cool, we couldn’t leave it off the list. It’s a square-ish flying disc shaped like a flying squirrel! This one comes in three sizes. The smallest is 9×9 inches and the largest is 11×11 inches.

The Flying Squirrel hovers and swirls through the air, gliding along for some distance just like the animal it’s named after. If your pet has mastered fetching Frisbees, the Flying Squirrel can be a great way to add a more unpredictable fetch toy into the play routine. 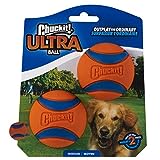 ChuckIt balls come in several different styles and designs. You’ve got your basic, a high-bounce rubber ball that ranges from small (2 inches) to extra large (4 inches.) Then you’ve got the Whistler Balls, rubber balls with a small hole that whistles while the balls are airborne. 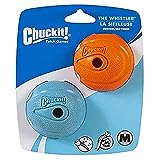 If noises excite your puppy, the Whistler Balls are a very cool choice. 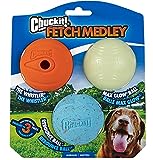 Another good option is the Fetch Medley 3-pack, which contains a basic rubber ball, a neon glow-in-the-dark ball (“Max Glow”), and a Rebounce Ball, which is a tough ball composed of recycled natural rubber.

This post is just the tip of the iceberg, since the company manufactures several dozen different ChuckIt ball launchers and fetch toys. Take a look around Amazon or your favorite local pet store for other ideas for the fetch toys that will work best for your special friend!

Are you tired of buying the same toys over and over again? Odds are if your buying ChuckIt! products you don’t have as much of an issue. If you are also looking for some great chew toys that will last the test of time read our article about “Best Indestructible Dog Toys”. This article will help you add some more toys to your dogs arsenal of fun!