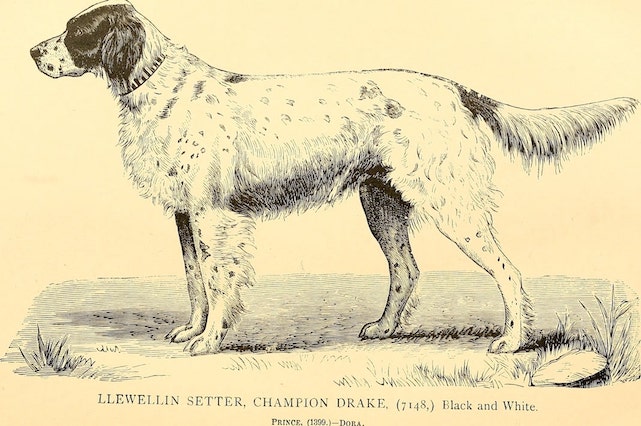 The Llewellin Setter is a specific strain from the English Setter dog breed. This strain is a mixture of Duke-Rhoebe-Laverack, and eventually crossed with Armstrong’s dog, Kate. The Llewellyn Setter was granted separate recognition in 1901 by The American Field‘s Field Dog Stud Book. This breed is considered to be different from the English setter despite sharing many similarities.

The Llewellin Setter was developed by R. Purcell Llewellin, a Welshman, who obtained the breed from an infusion of both the Gordon and other strains of setters. The crossbreed led to the development of the Llewellin, a small stature dog with little ears and a tendency to be drawn from other hunting dogs.

The Llewellin setter is a field dog that has excellent endurance and an innate desire to hunt for birds. This hunting enthusiast owes this trait to its closeness to the hunting Lavarack strain, which is bred to hunt. However, when taken as a pet, the Llewellin is very mild and reserved with a sweet nature and a desire to be in people’s company. 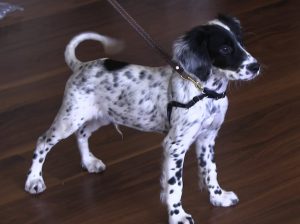 While there are plenty of exceptions, most male Llewellins range from 45-65 pounds and females from 35-55 pounds. Males may be 19-26 inches at the shoulder and the females measure 18-24 inches.

Life Span of a Llewellin Setter 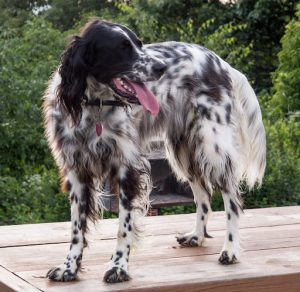 The Llewellin Setter’s lifespan typically goes for at least 12 years based on the nutrition, conditioning, exercise, and genetic history. Some dogs may have some genetic conditions that may shorten their lifespan. It is essential to look out for symptoms and conditions of the dog to establish its health status. Some life-threatening diseases may be from the environment, nutrition, or even inherited. In other cases, as the dog gets older, they can get cataracts which interfere with their eyesight.

The Llewellin Setter as a Pet

The Llewellin Setter breed can make an excellent family dog. Their playful nature makes them perfect for families with children to keep them busy and entertained. They generally have a mild temperament. Llewellin Setters are also very nurturing and will look after small children around the house. Additionally, this breed is incredibly social and are seen to appreciate spending quality time with their human friend/owner. 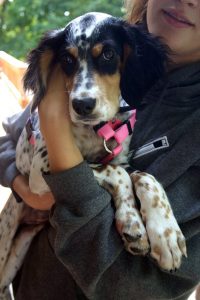 Although they can be highly energetic, athletic, and playful, they are still very conscious of their surroundings. However, since they are used to the outdoors and participating in hunting activities, they can be challenging to housetrain. They are affectionate dogs but can be stubborn and manipulative at times. This is why it’s important to patiently train them at a young age, especially if you want to keep them as indoor companions.

Needs a Place to Run

Llewellin Setters were bred to become working dogs. They are happiest and healthiest when they are mentally and physically challenged. This means that they need to have various tasks to do, especially outdoor tasks that require a lot of running, jogging, or both. They also tend to enjoy playing sporting activities such as the flyball as well as going on hunting escapades. This means that the breed is not best for a city apartment living dog and will require to have a home with a big backyard or even a farm.

If you want to keep them as an indoor family pet, it is essential to ensure that they get the proper amount of exercise for both mental and the physical stimulation. Keep in mind that the lack of exercise for this active breed will lead to chewed up furniture and shoes in the house. Don’t forget to put these dogs through an excellent training program when they are young. That way, they will see you as pack leader and respect your and your family.

Best Food for the Llewellin

I believe that all dogs should be fed with the absolute adherence to their diets and dietary needs. This starts with the puppy stage up to adulthood. Their health and wellbeing are partially dependent on the type of food you feed them. Good food boosts their immune system to keep them healthy and robust for a longer period of time. Check out this article on the Best Dog Food Brands for ideas of what brand of dog food you can give to your pet. 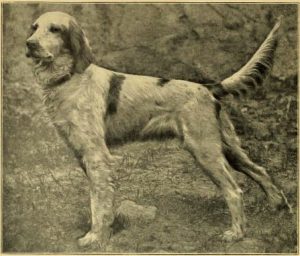 The Llewellin Setter breed is an active dog that requires exercise and regular running. Consequently, they do need a lot of space. Up until a few years ago, these dogs were mostly outdoor pets, but now people are keeping them as indoor pets. This new trend is not a problem as long as they get the proper exercise that they need in the outdoors. That means walking or running them on a daily basis to prevent disruptive behaviors. That being said, the Llewellins are very social and affectionate dogs that will make a great addition to your family.

We find that these dogs are quite enjoyable and will make excellent indoor or outdoor pets as long as they get the proper training and exercise.